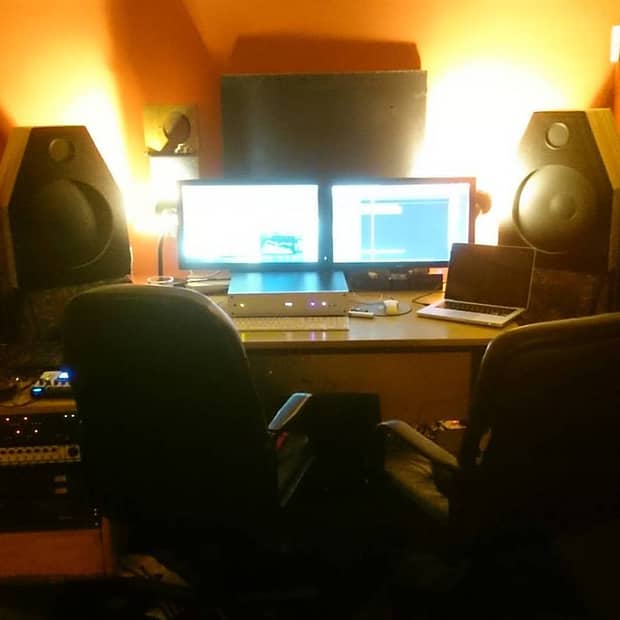 The Custom Install Audio studio monitor critical listening tests are backing up the initial WOW factor. Detailed impressions to follow in a full blog on KJAMM Mastering Online when we’re done development tweaks with CIA owner, designer and proud Scot, Derek Alexander Wilson. His new patents and several years of R&D are behind the 40mm modal bending driver. Apparently the original concept came from a German developer in the 70s. Vorsprung durch Scotts Technik one might say 😉

Anyway, it’s crossing over to the 15″ sealed and super-damped woofer at 300Hz with steep linear phase crossovers and phase alignment all in the dig domain. Currently handled by the
DEQX Speaker and Room Correction Processors box centre pic, with various proprietary options for production runs. Total configurabiilty and room analysis WILL come as standard in production. That much, at least is clearly an emerging studio monitor path. But these waterfall plots drop off a cliff! Unlike all transmission line and ported cabs…. It was those waterfall plots that got me straight on the phone to Derek. And I can report that the consequent time alignment of these RED ( Rapid Energy decay) drivers gives a transparency and imaging at least as good as the best systems I’ve ever heard. The detail …and the grunt… are seriously impressive, so’s the connectivity. You get a visceral front edge on the sub and bass impulses and clear, natural decay of harmonic envelopes. Personally, I just refuse to master on systems with seperate sub, cos chasing those impulses is like trying to catch oxygen with a sieve.
The lovely absence of 3k ear mullering I expect from many contemporary ‘studio monitors’ is a joy. It’s ESSENTIAL to get accuracy accross a long work day.

Derek is back this week to catch up on findings from the very first pro road-test with Leon Recharge Audio and myself. We’ve loved the classy engineering, and the artistry revealed cruising these with the foot down on the audio autobahn – easing past the current industry flagships flapping in their own drag ports.

We now want to explore potential refinements in the crossover slopes etc so we can see just what sort of frequency profile options are possible for those that might prefer muscular urban byaaaaass one session … then prominent warmer low mids for the next client.

These monitors are now attracting serious attention. We were pleased to welcome classical recording legend Tony Faulkner (Green Room Productions) to the previously less hallowed halls of Sirkus Studios Nottingham – sufficiently intrigued to stop off on a working trip up to Leeds! A pleasurable discourse over tea ensued… Nice to meet you Tony after pointing so many students beyond that veil of received wisdom in non-practitioner textbooks – in the direction of your empirical expertise and pragmatic practice.

I tell you for nowt, we’re gonna be missing these bad boi when the prototypes go back for more manufacturing refinement prior to launch this fall 😐
#recording #studio #mastering #monitors #speakers #review #CustomInstallAudio